These [ blunt; rounded; not sharp; forthright; plainly executed ] paintings by Jespersa¹
painted in "Shalom Monastry Studio" is an indispensable palliative; to mitigate or alleviate.
I knew that I must paint not what I saw, but only what was in me, in my soul. 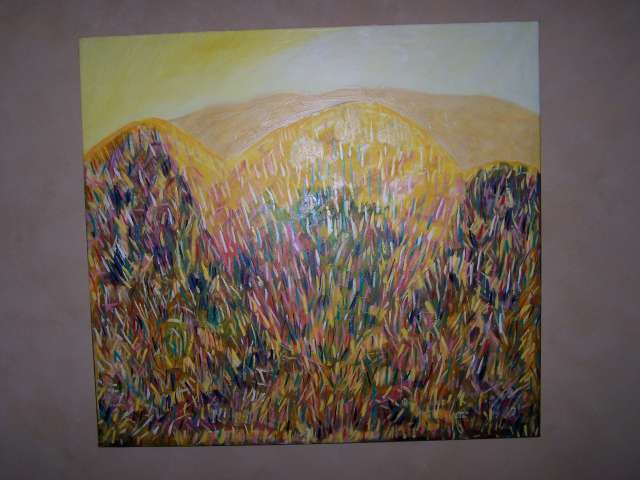 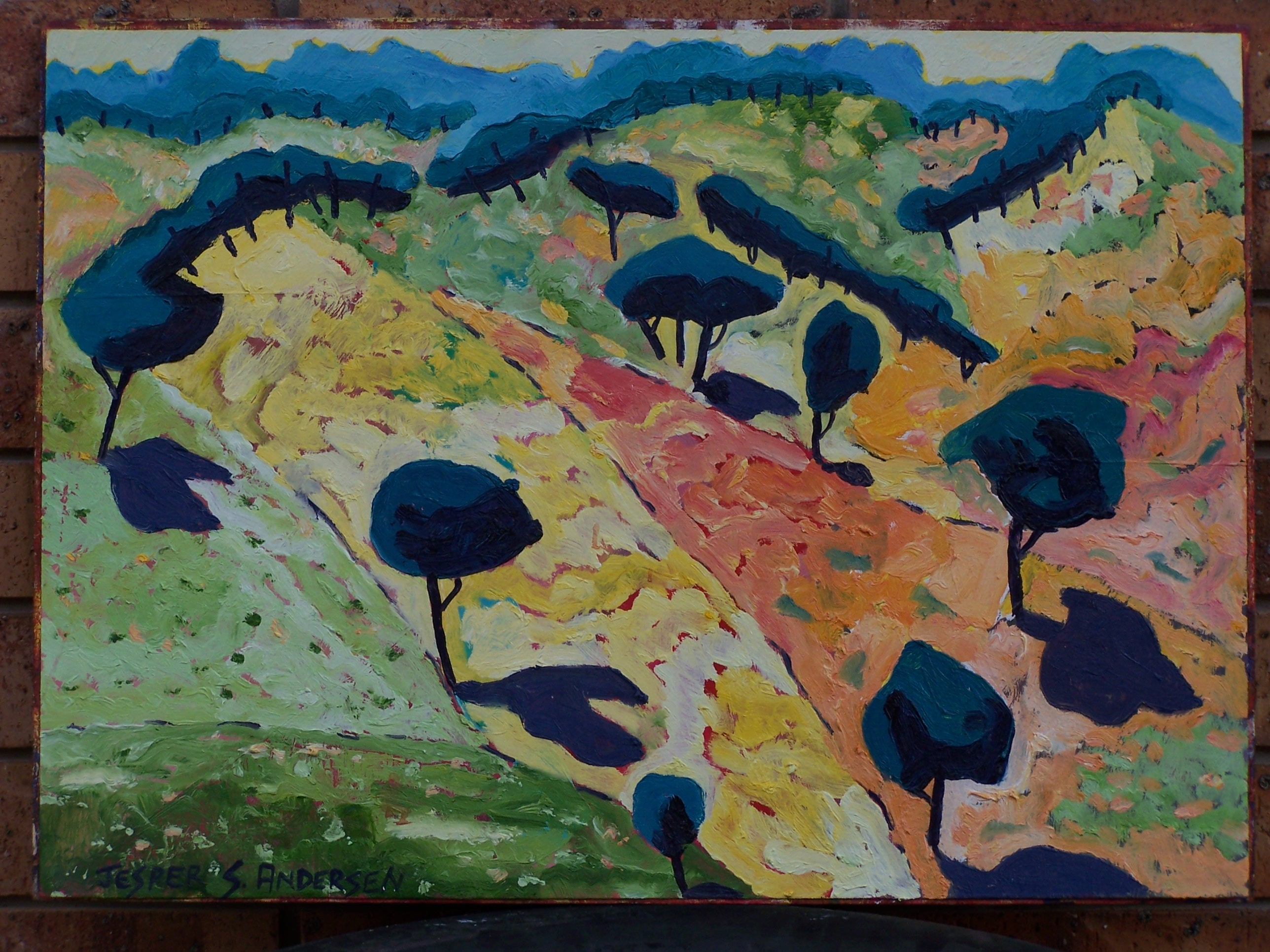 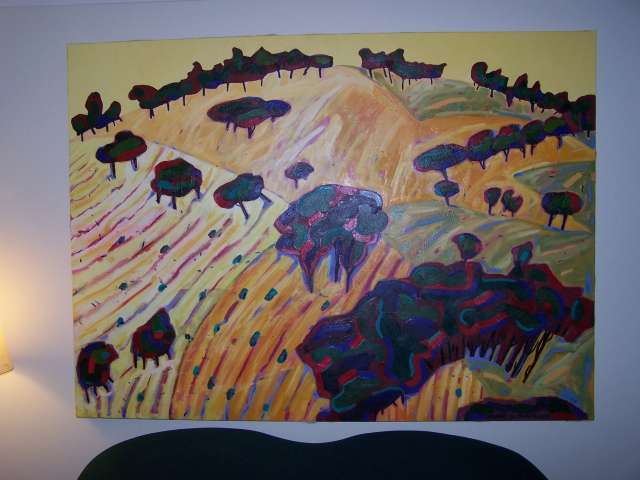 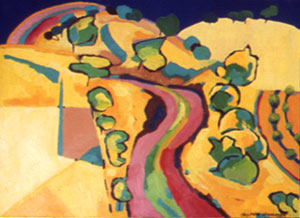 28. Collection of the painter, "en lille prygle² [ a little lashings² in the painters collection ] i maleren samling " [Danish]. 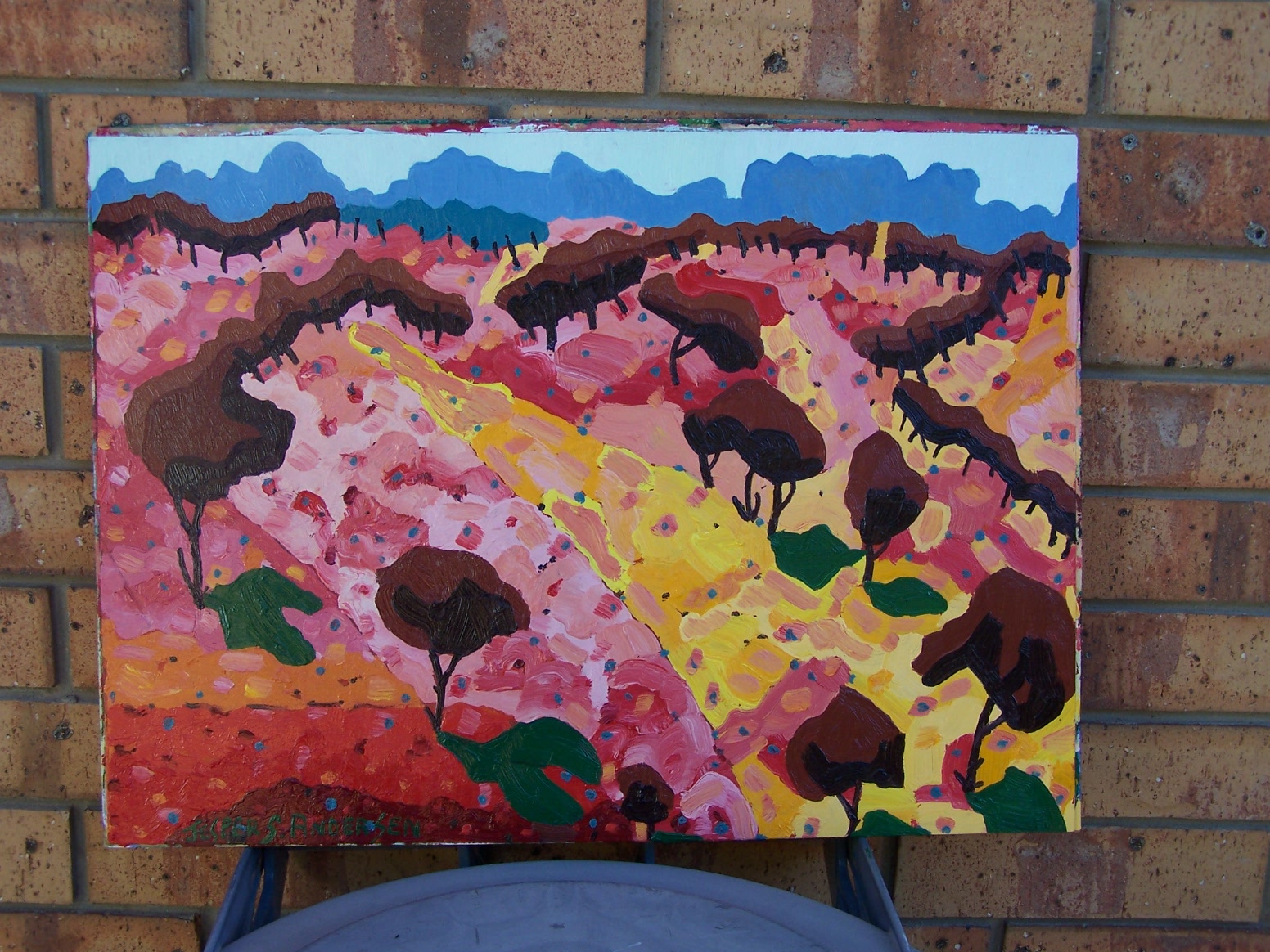 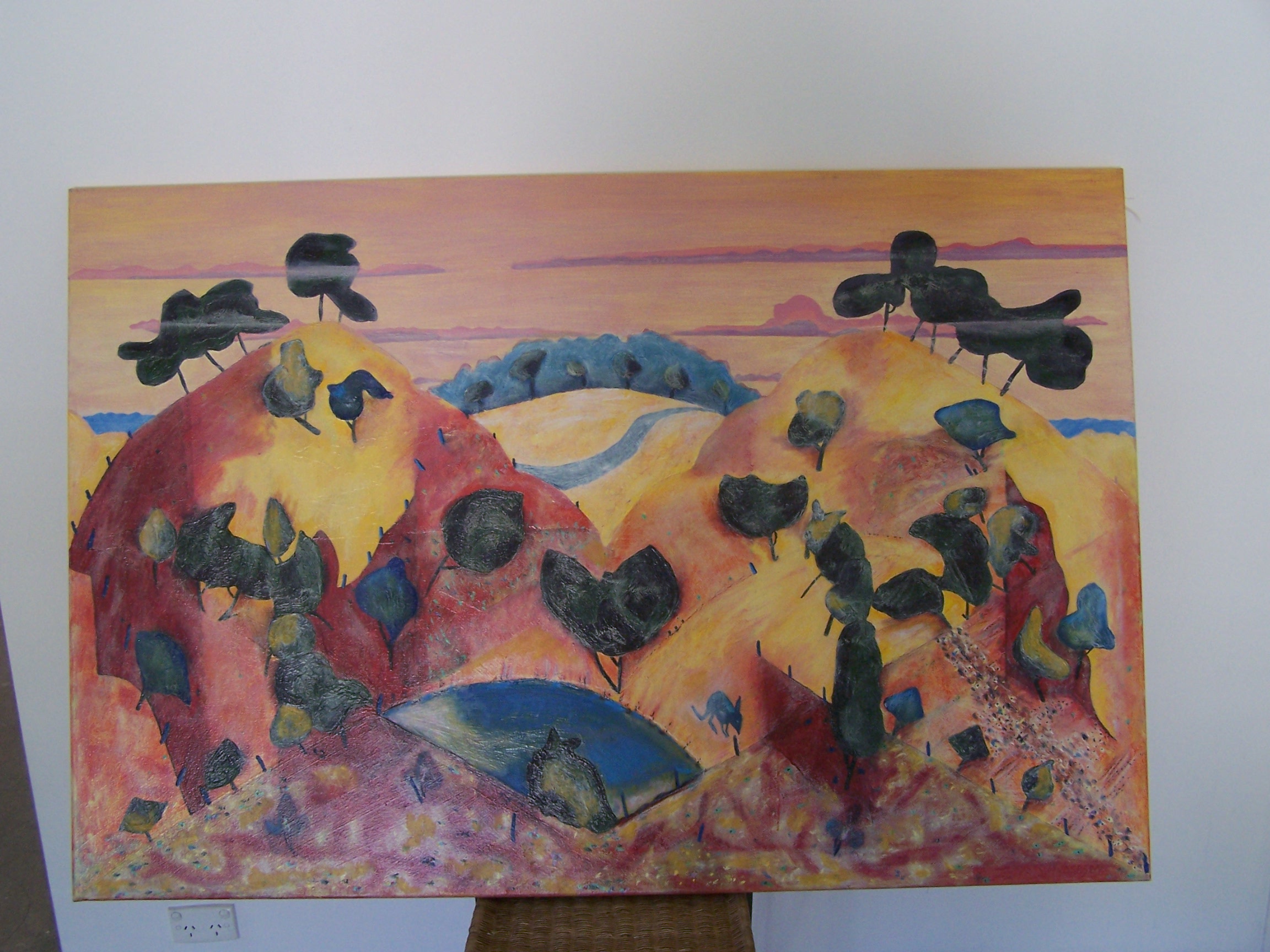 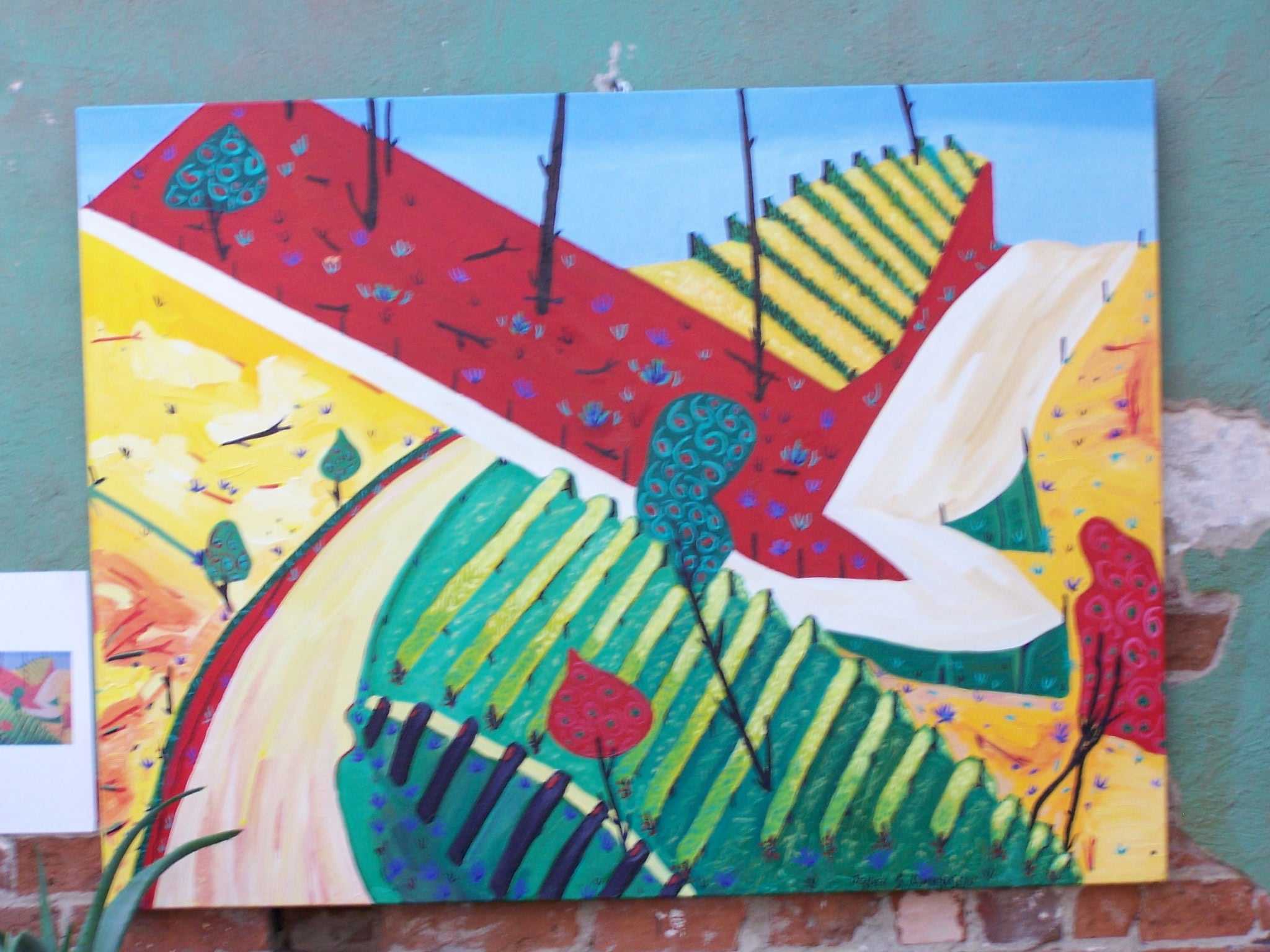 This Harvest art journal - Acknowledge the Kaurna people, the traditional custodians whose ancestral lands I gather on.
Expression through abstraction also Acknowledges the Traditional Owners of the country throughout Australia.

En-Garde-En-Provence.
For me, art is primarily a means of individual expression. I would prefer to be acknowledged for my unique vision rather than be confined to any one particular movement. This mentality lends itself to experimenting with a wide range of artistic disciplines, which is developing into a distinctive personal style.
If one were to draw an analogy from paintings, mostly colours, shapes and meaning to create an effect for the particular painting of Expression, Symbol and Primitivist the latter of which is a great source of inspiration.

START OF COMMERCIAL BREAK
" Don't be obsessed with getting more material things. Be relaxed with what you have." - The Message in contemporary language, by Eugene H. Peterson.
End of the commercial break.
The Painting's Shown Here In The Regional Journal Are Done On Oil Sketch Paper - Hessian Finished, 250gsm, Acid-Free, Mould Made With Retarder Which Eliminates Bleeding. [TPSHITRJADOSP]. 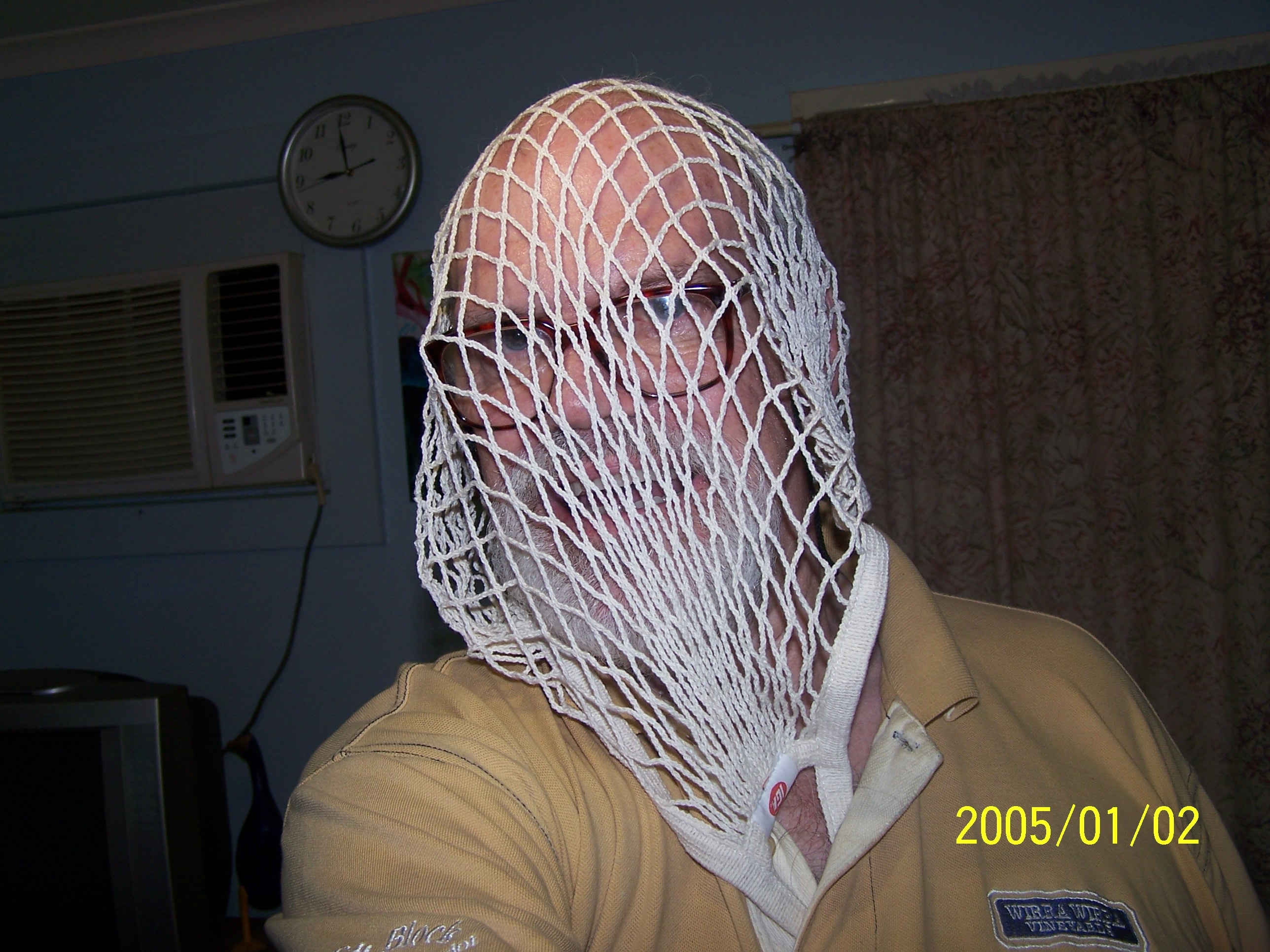 These blunt, rounded, not sharp, forthright and plainly executed paintings by Jespersa was
painted in "Shalom Monastry Studio" they are an indispensable palliative, to mitigate and alleviate. I knew that I must paint not what I saw, but only what was in me, in my soul, and I listened.
I create unique experiences that approach my friends with their followers and users highlighting innovations from point to point referring to the tips of one's toes or to the movement from place to place uncountable.
Anyone who tells a lie has not a pure heart, and cannot make a good soup. An honest answer is like a warm hug. These wise words preached me a sermon and I listened to the right word and applied the right tone of coloured oil paint at the right time of the relationship between space, colour and meaning.

OIL PAINTER PALETTE-SPEAK
Be provocative absurdity is underrated, if at first, the idea is not absurd, then there is no hope.

The social and spiritual agenda of my oil painting, search for a distinct style. Revelation, and the using of a limited repertoire of recurring motif or subject matter, often lead me to use my intuition with my minimal reductionist style of vibrant colour and geometric shapes which require a high degree of effort to fill in the details. I particularly like Yellow, Crimson and Phthalo Greens. The painting which is at times primitive, I consider myself a painter who is examining the lay of the landscape and flatness of the picture surface. Overall my painted oeuvre is not large.


The Brand and colours of oil paint that I use is
mainly primary colours, with an exception of
green on my palette as to harmonise with my
Primary School education after which I became
an autodidactic painter and to a lesser extent
a writer of journals and blogs.

Please take a look at my other journal and blogs:

ARTICLES:
1999 - Adelaide Hills Weekender, June '99, by Joel Weatherald.
1999 - “ Copyright conundrum puts an artist out of the picture “- Michael Reid " The Australian," newspaper, December 13th, 1999, page 18.
I have also had my paintings exhibited in 43 selected group shows between 1970 to 2010, below are an edited, and incomplete list of places and galleries were I have shown my artwork:

1971, 1972 PRIZES Won: Jesper attended Julian Ashton Art School in Sydney where he won the Noni Guthrie prize for free expression in 1971 and shared the 1st prize in 1972 in the Phillip Musket Prize for landscape. jespersa at Solitude of the Ark. In fiction, when one person reads the mind of another, it is often described as being able to hear this internal monologue as if it were said out loud.
Internal monologue, also known as inner voice, internal speech, or stream of consciousness is thinking in words. It also refers to the semi-constant internal monologue one has with oneself at a conscious or semi-conscious level. " ...I will extend peace to her like a river, and the wealth of nations like a flooding stream; you will nurse and be carried on her arm and dandled on her knees." Solitude as in " terroir " can be very loosely translated as "a sense of place," which is embodied in certain characteristic qualities, the sum of the effects that the local environment has had on the production of the art. At its core is the assumption that the land from which the art is inspired, imparts a unique quality that is specific. The amount of influence and the scope that falls under the description of terroir has been a controversial topic in visual art. 
YOU BROWSE YOU BUY
I was browsing an art magazine - Fine Art of Today's West. When I saw an advertisement for an exhibition at “ Red Cloud Indian School “ by the American Sioux Lakota artist, Braveheart. After contacting him via E-mail, I painted the above autobiographical oil painting titled " Braveart " as a homage to Braveheart.
The motif in the painting shows a “ blue hand, blue meaning heavenly origin; the Lord from heaven, a white fingerprint; white meaning light, righteousness, purity, and three Sioux Indian words, floating on oval cells, suggesting movement of the Internet and different tribes of post-modern people meeting one another in cyberspace. I understand the two Sioux words, " Lakota and Ohitika ". Lakota; meaning friend, and Ohitika; meaning brave. My art consists of works produced by myself, who for various reasons I have not been culturally indoctrinated or socially conditioned. They are all kinds of artworks on the fringes of society. I am working outside fine art "system" (schools, galleries, museums). These pictures have been produced, from the depths of my own personality and for myself, and exhibited only on this Internet blog site. Works of outstanding originality in concept, subject and techniques, creativity are untidy and unnerving. They are works that owe nothing to tradition or fashion. They form a truly singular reality of their own.

Underestimate me, that'll be fun. The myth of the Nullarbor Nymph was born in December of 1971 and has become outback folklore. A young woman was photographed, wearing some strategically placed animal skins, running along the Nullarbor Plain. The female beauty lived in the desert with the kangaroos. National and worldwide media organizations flocked to the tiny town of Eucla just over the Western Australian border. Eucla is so small that if you blink on your way through, you’d miss it. A motel, petrol bowsers, one phone box, and a population of eight. There where even suggestions that she might be an itinerant Adelaidian who had disappeared from the motel the year before, leaving all her belongings behind. Out there, in the middle of nowhere, it seemed possible, even likely. The locals were taking tourists out into the scrub and surrounding bushland, showing them imprints of a woman's feet in the sand, and a place where it was believed the Nullarbor Nymph had her humpy.
In other words, the patterns are directly perceived as somehow meaningful and thereby offer themselves as salient motifs for use in rituals.

What are some good ways to improve English grammar and writing abilities for a non-native speaker?

Communicating fluently in English is a gradual process, one that takes a lot of practice and time to hone. In the meantime, the learning process can feel daunting: You want to get your meaning across correctly and smoothly, but putting your ideas into writing comes with the pressure of their feeling more permanent. This is why consistent, tailored suggestions are most helpful for improving your English writing abilities. Seeing specific writing suggestions based on common grammatical mistakes multilingual speakers make in English is key to improving your communication and English writing fluency.
Regular feedback is powerful because writing in a language that isn’t the first one you learned poses extra challenges. It can feel extra frustrating when your ideas don’t come across as naturally as in your primary language. It’s also tough to put your writing out there when you’re not quite sure if your grammar and wording are correct. For those communicating in English in a professional setting, your ability to write effectively can make all the difference between collaboration and isolation, career progress and stagnation.

This oil painting is titled; War and Peace '. This was the first oil painting on the subject of the female form in the landscape series. Seen from a high vantage point, this approachable landscape embodies a pioneering spirit with our impact on the natural environment, as roads cut into the landscape, and with it's frontal aspect of the Seaview sub-region. An enthusiasm for lemon citrus colour, adding a tangy note to this animated subject, with a hint of vineyard. This painting is as fiercely original as the beautiful country of the Fleurieu Peninsula is remote.

jespersa at Salvation Jane and Vineyard. © This modernist oil painting shows vineyards in the Fleurieu Peninsula wine-growing region. It's an intuitive representation of colour and form that I perceive, and have reduced the pictorial space to a two-dimensional plane, eliminating illusion and representing objects as geometric shapes.
It has shallow red-brown ironstone soils with limestone, surrounded by white-flowered Almond blossom flora, with a suggestion of megafauna in the Salvation Jane vineyards. The painting is a self-sufficient entity independent of the external world of Willunga. Which lies south of Adelaide, the capital city of South Australia.
Shalom Aleichem! - Peace be unto you.
Collapse